A queer, shadowy bird, that sleeps all day in the dense wood and flies about through open country after dark as softly as an owl, would be difficult for any child to know were it not for the weird, snappy triplets of notes that tell his name. Every one knows him far better by sound than by sight. Whip-poor-will (chuck) whip-poor-will (chuck) whip-poor-will (chuck) he calls rapidly for about two hours, just after sunset or before sunrise from some low place, fluttering his wings at each announcement of his name. But you must be near him to hear the chuck at the end of each vigorous triplet; most listeners don’t know it is there.

You might be very close indeed without seeing the plump bird, about the size of a robin, who has flattened himself lengthwise against a lichen-covered branch until you cannot tell bird from bark. Or he may be on a rock or an old, mossy log, where he rests serene in the knowledge that his mottled, dull dark-brown, gray, buff, black and white feathers blend perfectly with his resting place. He must choose a spot broad enough to support his whole body, for, like his cousin, the nighthawk, and his more distant relatives, the hummingbird and the swift, his feet are too small and weak for much perching. You never see him standing erect on a twig with his toes clasped around it, but always squatting when at rest.

A narrow white band across his throat makes his depressed head look as if it had been separated from his body—a queer effect that may remind you of the Cheshire Cat in “Alice in Wonderland.” The whip-poor-will’s three outer tail feathers have white ends which help to distinguish him from the nighthawk. He has a funny little short beak, but his large mouth stretches from ear to ear, and when he flies low above the fields after sunset, this trap is kept open, like the swift’s and the swallow’s, to catch any night-flying insects—mosquitoes, June bugs, gnats, katydids and little moths—that cross his path. Long, stiffened bristles at the ends of his mouth prevent the escape of a victim past the gaping trap. On the wing the bird is exceedingly swift and graceful. Some children mistake him for a bat or a nighthawk.

Relying upon the protective covering of her soft plumage, the mother whip-poor-will builds no nest, but lays a pair of mottled eggs directly on the ground in the dark woods where a carpet of dead leaves and decayed wood makes concealment perfect. 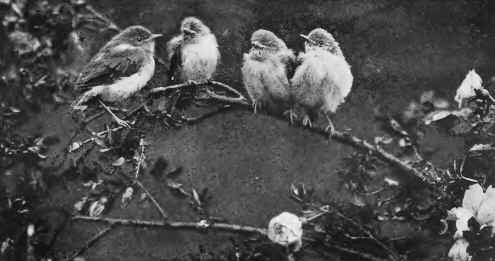 Least flycatchers in a rose bush. 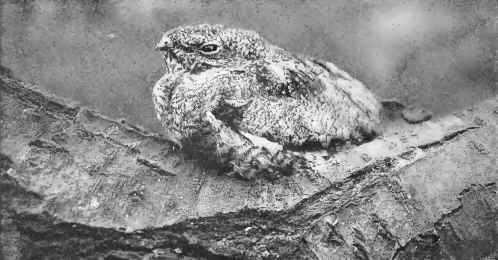 Nighthawk resting in the sunlight.

Not even the ovenbird contrives that a peep at her eggs shall be so difficult for us. It is next to impossible to find them. Unlike the wicked cowbird, who builds no nest because she has no maternal instinct, the whip-poor-will, who is a devoted mother, makes none because none is needed. Once I happened upon two fuzzy, dark, yellowish-gray, baby whip-poor-wills (mostly mouths) in a hollow of a decayed, lichen-covered log, which was their “comfy” cradle; but the frantic mother, who flopped and tumbled about on the ground around them, whining like a puppy, sent me running away from sheer pity.

In the Southern States a somewhat larger whip-poor-will, but with the same habits, is known as chuck-will’s-widow.