Bird – The Purple And The Bronzed Grackles – Crow Blackbirds

Bird Identification – The Purple And The Bronzed Grackles – Crow Blackbirds

You probably know either one of our two crow blackbirds, similar in size and habits, one with purplish, iridescent plumage, the commonest grackle east of the Alleghenies and south of Massachusetts, and the bronzed grackle, with brassy tints in his black plumage, who overruns the Western country and from Massachusetts northward. Both have uncanny, yellow eyes that make you suspect they may be witches in disguise. Their mates are a trifle smaller and duller.

When the trees are still leafless in earliest spring and the ground is brown and cold, flocks of blackbirds dot the bare trees or take shelter from March winds among their favourite evergreens, or walk solemnly about on the earth like small crows, feeding on fat white grubs and beetles in a business-like way. They are singularly joyless birds. A croaking, wheezy whistle, like the sound of a cart wheel that needs axle-grease, expresses whatever pleasure they may have in life.

Always sociable, living in flocks the entire year through, it is in autumn only that they band together in enormous numbers, and in the West especially, do serious havoc in the cornfields. However, they do incalculable good as insect destroyers, so the farmers must forgive the “maize thieves.”

Was ever a family so ill-assorted as the blackbird and oriole clan? What traits are common to every member of it? Not one, that I know. Some of the family, as you have seen, are gorgeously clad, like the Baltimore oriole; some quite plainly, like the cowbird; and although black seems to be a prevalent colour in the plumage, the meadowlark, for example, is a brown bird with only a black crescent on its breast. Most of the males are dressed quite differently from their mates, although the female grackles are merely duller. Some of these birds sing exquisitely; others wheeze or croak a few unmusical notes. Some live in huge flocks; some live in couples. Some, like the bobolinks, travel to the tropics and beyond every winter; others, like the meadowlark, can endure the intense cold of the North. Part of the family feed upon the ground, but the oriole branch live in the trees. Devotion to mates and children characterise most of the family, but we cannot overlook the cowbird that neither mates nor takes the slightest care of its offspring. The cowbird builds no nest, while its cousin, the Baltimore oriole, is a famous weaver. The bobolink is a rollicking, jolly fellow; the grackle is solemn, even morose. What a queer family! 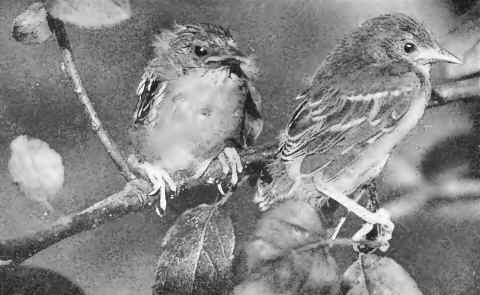 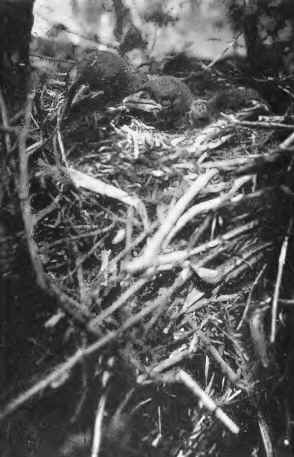 “There were three crows sat on a tree”