When you see a dusky bird, smaller than a robin, lighter gray underneath than on its sooty-brown back, with a well-rounded, erect head, set on a short, thick neck, you may safely guess it is one of the flycatchers—another strictly American family. If the bird has a white band across the end of its tail it is probably the fearless kingbird. If the feathers on top of its head look as if they had been brushed the wrong way into a pointed crest; moreover, if some chestnut colour shows in its tail when spread, and its pearly gray breast shades into yellow underneath, you are looking at the noisy “wild Irishman” of birddom, the crested flycatcher. Confiding Phoebe wears the plainest of dull clothes with a still darker, dusky crown cap, and a line of white on her outer tail feathers. She and the plaintive wood pewee, who has two indistinct whitish bars across her extra-long wings, are scarcely larger than an English sparrow; while the least flycatcher, who calls himself Chebec, is, as you may suppose, the smallest member of the tribe to leave the tropics and spend the summer with us. Male and female members of this family wear similar clothes, fortunately for “every child” who tries to identify them.

You can tell a flycatcher at sight by the way he collects his dinner. Perhaps he will be sitting quietly on the limb of a tree or on a fence as if dreaming, when suddenly off he dashes into the air, clicks his broad bill sharply over a winged insect, flutters an instant, then wheels about and returns to his favourite perch to wait for the next course to fly by. He may describe fifty such loops in mid-air and make as many fatal snap-shots before his hunger is satisfied. A swallow or a swift would keep constantly on the wing; a vireo would hunt leisurely among the foliage; a warbler would restlessly flit about the tree hunting for its dinner among the leaves; but the dignified, dexterous flycatcher, like a hawk, waits patiently on his lookout for a dinner to fly toward him. “All things come to him who waits,” he firmly believes.

None of the family is musically gifted, but all make a more or less pleasing noise. Flycatchers are solitary, sedentary birds, never being found in flocks; but when mated, they are devoted home lovers.

We are apt to think of tropical birds as very gaily feathered, but certainly many that come from warmer climes to spend the summer with us are less conspicuous than Quakers. 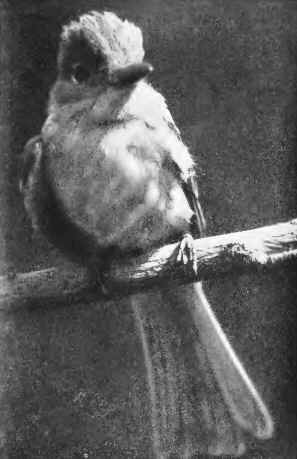 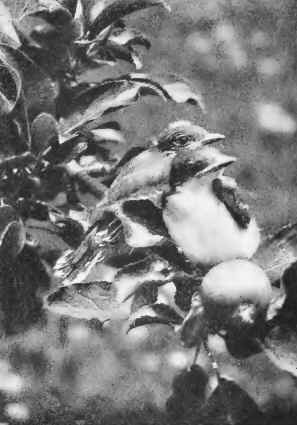 Baby kingbirds in an apple tree.

Leave a reply to Bird – The Flycatchers
30 Days Wild