So few birds wear their head feathers crested that it is a simple matter to name them by their top-knots alone, even if you did not see the gray plumage of the little tufted titmouse, the dusky hue of the crested flycatcher, the blue of the jay and the kingfisher, the red of the cardinal, and the richly shaded grayish-brown of the cedar waxwing, which is, perhaps, the most familiar of them all. His neat and well-groomed plumage is fine and very silky, almost dove-like in colouring, and although there are no gaudy features about it, few of our birds are so exquisitely dressed. The pointed crest, which rises and falls to express every passing emotion, and the velvety black chin, forehead, and line running apparently through the eye, give distinction to the head. The tail has a narrow yellow band across its end, and on the wings are the small red spots like sealing wax that are responsible for the bird’s queer name. The waxwing is larger than a sparrow and smaller than a robin.

But it is difficult to think of a single bird when one usually sees a flock. Sociable to a degree, the waxwings rove about a neighbourhood in scattered companies, large and small, to feed on the cedar or juniper berries, choke-cherries, dog-wood and woodbine berries, elder, haw, and other small wild fruits on which they feed very greedily; then move on to some other place where their favourite fruit abounds. Happily, they care very little about our cultivated fruit and rarely touch it. A good way to invite many kinds of birds to visit one’s neighbourhood is to plant plenty of berry-bearing trees and shrubs. The birds themselves plant most of the wild ones, by dropping the undigested berry seeds far and wide. How could the seeds of many species be distributed over thousands of miles of land without their help? It will surprise you to count the number of trees about your home that have been planted, quite unconsciously, by birds many years before you were born. Cedarbirds are responsible for no small part of the beauty of the lanes and hedgerows throughout their wide range from sea to sea and from Canada to Mexico and Central America. Nature, you see, makes her creatures work for her, whether they know they are helping her plans or not.

When a flock of cedarbirds enters your neighbourhood, there is no noisy warning of their coming. Gentle, refined in manners, courteous to one another, almost silent visitors, they will sit for hours nearly motionless in a tree while digesting a recent feast. An occasional bird may shift his position, then, politely settling himself again without disturbing the rest of the company, remain quiet as before. Lisping, Twee-twee-zee call notes, like a hushed whispered whistle, are the only sounds the visitors make. How different from a roving flock of screaming, boisterous blue jays! 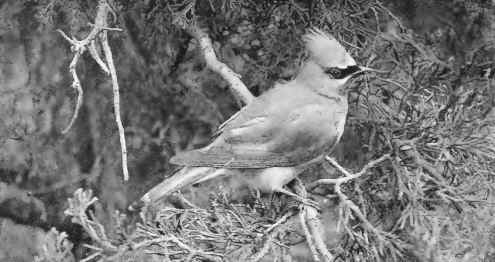 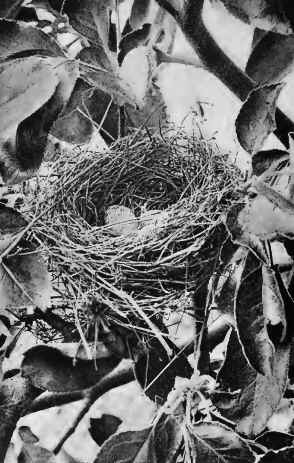 The gorgeous scarlet tanager who sang in this tree was killed by a sling-shot. The nest was deserted by his terrified mate.

When rising to take wing, the squad still keeps together, flying evenly and swiftly in close ranks on a level with the tree-tops along a straight course; or, wheeling suddenly, the birds dive downward into a promising, leafy, restaurant. Enormous numbers of insects are consumed by a flock. The elm-beetle, which destroys the beauty, if not the life, of some of our finest shade trees, would be exterminated if there were cedarbirds enough. One flock within a week rid a New England village of this pest that had eaten the leaves on the double row of elms which had been the glory of its broad main street for over a hundred years. When you see these birds in an orchard, look for better apples there next year. Canker-worms are a bon bouche to them; so are grubs and caterpillars, especially cutworms.

Sometime after all the other birds, except the tardy little goldfinch, have nested, the waxwings give up the flocking habit and live in pairs. Toward the end of June, when many birds are rearing the second brood, you may see a couple begin to carry grass, shreds of bark, twine, fine roots, catkins, moss or rags—any or all of these building materials—to some tree, usually a fruit tree or a cedar; and then, if you watch carefully, you will find what is not always the case with humans—the birds’ manners at home are even better than when moving in society abroad. The devoted male brings dainties to his brooding mate and helps her feed their family. Moreover, cedarbirds are very good to feathered orphans.