“Teacher—Teacher—TEACHER—TEACHER—TEACHER!” resounds a penetrating, accented voice from the woods. Who calls? Not an impatient scholar, as you might suppose, but a shy little thrush-like warbler who has no use whatever for any human being, especially at the nesting season in May and June, when he calls most loudly and frequently. Beginning quite softly, he gradually increases the intensity of each pair of notes in a crescendo that seems to come from a point much nearer than it really does. Once heard it is never forgotten, and you can always be sure of naming at least one bird by his voice alone. However, his really exquisite love song—a clear, ringing, vivacious melody, uttered while the singer is fluttering, hovering, high among the tree-tops—is rarely heard, or if heard is not recognised as the teacher’s aerial serenade. He is a warbler, let it be recorded, who really can sing, and beautifully, however rarely. 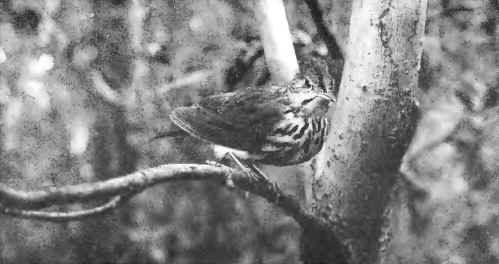 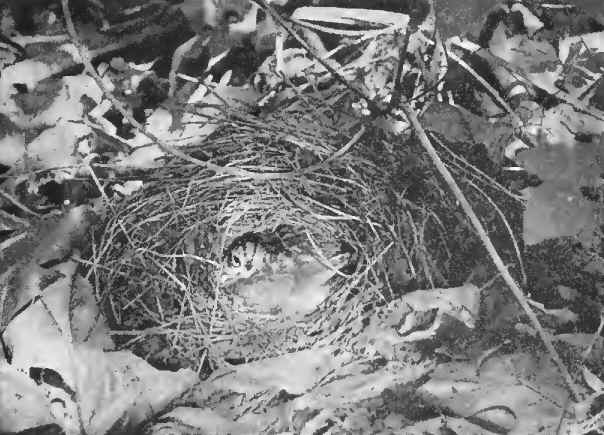 Ovenbird in her cleverly hidden nest. Some of the leaves and sticks have been pulled away from the front to secure her picture. 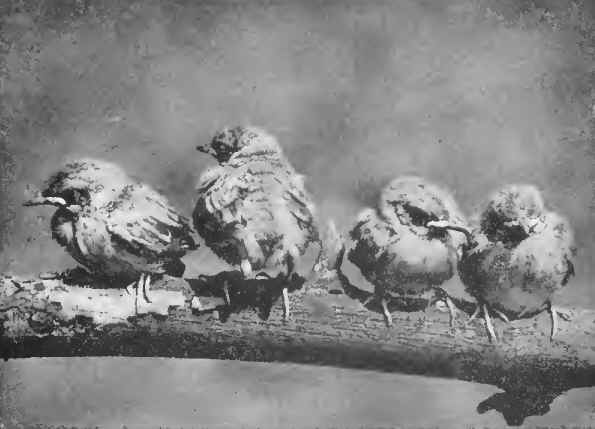 Why is he called the oven-bird? A little girl I know was offered five dollars by her father if she could find the bird’s nest in the high dry woods near her home. ”Teacher!” was the commonest sound that came from them. It rang in her ears all day, so of course she thought it would be “too easy” to earn the money. Every afternoon, when school was out, she tramped through the woods hour after hour, poking about among the dead leaves, the snapping twigs, the velvety moss, the fallen logs, the young spring growth of the little plants and creepers, always keeping her eyes on the ground where she knew the nest would be found. Day after day she continued the search. Every time she saw a little hump of dead leaves or twigs and grasses her heart bounded with hope, but on closer examination she found no nest at all. Finally, one day when she was becoming discouraged, she spied in the path a little brownish olive bird, about the size of an English sparrow, but with a speckled, thrush-like breast and a dull orange V-shaped patch, bordered by black lines, on the top of his head. He was walking about on the ground, nodding his head as if marking time, not hopping, sparrow-fashion; and he took very dainty, pretty steps that suggested a French dancing master. Occasionally he would scratch the path for insects, like a tiny chicken. Although she had never seen the teacher, and had expected that the loud voice came from a much larger bird, she felt sure that this must be he, so she sat down on a log and watched and waited. Presently she saw him tug at a fine black hair-like root that lay across the path, and, snapping it off, quickly fly away, away—oh, where did he go with it? She ran stumbling after him through the undergrowth to a little clearing. There another bird, just like him, whom she instantly guessed was his mate, flew straight toward her, dropped to the ground, ran about distractedly, dragging one wing as if it were broken, and uttering sharp, piteous notes of alarm. The little girl didn’t like to distress the birds, of course, but how could she resist the temptation to find their nest? So on she tramped around and around in an ever widening circle, the excited birds still hovering near and sharply scolding her. You may be sure she was quite as excited as they.

At last, a little dome-shaped mound of grasses, half hidden among the dry brown oak leaves and wild geranium, gladdened her eyes. Running around to the opposite side she knelt down on the grass, peeped under the arched roof and into the nest, which was shaped like an old-fashioned Dutch oven. Was ever a sight so welcome? She almost screamed with joy. Through the opening on one side, that was about three inches high, she could see the lining of fine black rootlets, just like the one she had watched the bird snap off and carry away. Then she flew home, as if she too had wings, and, calling breathlessly “Oh Father! Father! I’ve found it!” burst into the house. A week before even one white speckled egg had been laid in the oven-bird’s nest, there was a golden half eagle in a happy little girl’s palm. A fortnight later a man with a camera took a picture of the patient mother-bird, whose pretty striped head you see peeping out from under the dome.