The Gray Wolf, live in many different habitats including temperate forests, mountains, tundra, taiga and grasslands. 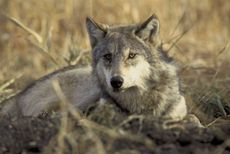 In the contiguous United States, with the exception of Minnesota and Wisconsin (where they have a threatened status), they are listed as endangered under the Endangered Species Act of 1973. They continue to be hunted in many areas of the world as perceived threats to livestock and humans, as well as for sport

Wolf weight and size can vary greatly worldwide, though both tend to increase proportionally with higher latitudes. Many people have an exaggerated idea of the wolf’s size, although it is not a small animal. Generally speaking, height varies from 0.6–0.8 meters (26–32 inches) at the shoulder, and weight can range anywhere from 23–59 kilograms (50–130 pounds), making wolves the largest among all wild canids.

Wolves can measure anywhere from 1.3–2 meters (4.5–6.5 feet) from nose to tail tip, with the tail itself consisting of approximately one quarter of overall body length 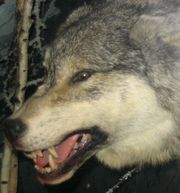 Dominance – A dominant wolf stands stiff legged and tall. The ears are erect and forward, and the hackles bristle slightly. Often the tail is held vertical and curled toward the back. This display shows the wolf’s rank to all others in the pack. A dominant lupine may stare penetratingly at a submissive one, pin it to the ground, “ride up” on its shoulders, or even stand on its hind legs.
Submission (active) – In active submission, the entire body is lowered, and the lips and ears are drawn back. Sometimes active submission is accompanied by muzzle licking, or the rapid thrusting out of the tongue and lowering of the hindquarters. The tail is placed down, or halfway or fully between the legs, and the muzzle often points up to the more dominant animal. The back may be partially arched as the submissive wolf humbles itself to its superior; a more arched back and more tucked tail indicate a greater level of submission.

Submission (passive) – Passive submission is more intense than active submission. The wolf rolls on its back and exposes its vulnerable throat and underside. The paws are drawn into the body. This is often accompanied by whimpering.
Anger – An angry lupine’s ears are erect, and its fur bristles. The lips may curl up or pull back, and the incisors are displayed. The wolf may also arch its back, lash out, or snarl.

Fear – A frightened wolf tries to make its body look small and therefore less conspicuous. The ears flatten down against the head, and the tail may be tucked between the legs, as with a submissive wolf. There may also be whimpering or barks of fear, and the wolf may arch its back.

Defensive – A defensive wolf flattens its ears against its head.

Aggression – An aggressive wolf snarls and its fur bristles. The wolf may crouch, ready to attack if necessary.
Suspicion – Pulling back of the ears shows a lupine is suspicious. In addition, the wolf narrows its eyes. The tail of a wolf that senses danger points straight out, parallel to the ground.

Relaxedness – A relaxed wolf’s tail points straight down, and the wolf may rest sphinx-like or on its side. The wolf may also wag its tail. The further down the tail droops, the more relaxed the wolf is.

Tension – An aroused wolf’s tail points straight out, and the wolf may crouch as if ready to spring.

Happiness – As dogs do, a lupine may wag its tail if it is in a joyful mood. The tongue may loll out of the mouth.

Hunting – A wolf that is hunting is tensed, and therefore the tail is horizontal and straight.

Playfulness – A playful lupine holds its tail high and wags it. The wolf may frolic and dance around, or bow by placing the front of its body down to the ground, while holding the rear high, sometimes wagged. This is reminiscent of the playful behavior demonstrated by domestic dogs 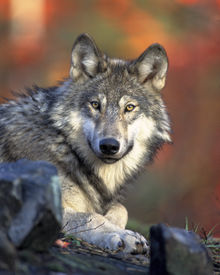 Did you know?
————-
Wolves, like other canines use scent marking to lay claim to anything from territory to fresh kills.

Alpha wolves scent mark the most often, with males doing so more than females. The most widely used scent marker is urine