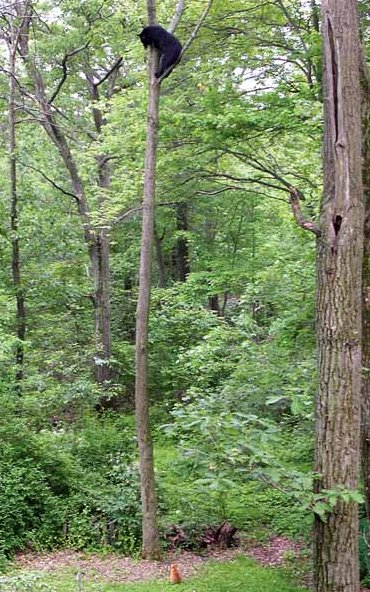 June 13, 2006—Perhaps not since the Cowardly Lion has an animal’s appearance been so at odds with its attitude.

On June 4 a black bear wandered into a West Milford, New Jersey, back yard, was confronted by a 15-pound (7-kilogram) tabby cat … and fled up a neighbor’s tree. Hissing at the base of the tree, Jack the clawless cat kept the bear at bay for about 15 minutes, then ran him up another tree after an attempted escape.

Finally, Jack’s owner, Donna Dickey, called the cat inside, and the timorous trespasser disappeared back into the woods.

“He doesn’t want anybody in his yard,” Dickey said of Jack in an interview with the Newark Star Ledger.

Unlike cats, bears aren’t typically territorial, roaming instead over vast areas that would be impossible to patrol for intruders. With a habitat that includes much of North America, black bears are seen fairly often in this region of New Jersey.