Do you own a cuckoo clock with a little bird inside that flies out of a door every hour and tells you the time? Except when it is time to go to school or to bed you are doubtless amused to hear him hiccough cuckoo, cuckoo, the mechanical notes that tell his name. Cuckoo clocks were first made in Europe where the common species of cuckoo calls in this way, but don’t imagine its American cousins do. Our yellow-billed cuckoo’s unmusical, guttural notes sound something like a tree toad’s rattle, kuk-kuk, kuk-kuk, kuk-kuk, kr-r-r-uck, kr-r-r-uck, kr-r-r-uck, kr-r-ruck, cow, cow, cow, cow! This is his complete “song,” but usually one hears only a portion of it. The black-billed cuckoo’s voice is softer, and its cow notes run together, otherwise their “songs” are alike. Both of our common cuckoos are slim, graceful birds about twelve inches long—longer than a robin. They are solitary creatures and glide silently among the foliage of trees and shrubbery, rarely giving you a good look at their satiny, grayish-brown backs and dull-white breasts. You may know the yellow-billed cuckoo by the yellow lower-half of his long, curved bill, his cinnamon-brown wings and the conspicuous white thumb-nail spots on his dark tail feathers. If you were to dip your thumb in white paint, then pinch these outer quills, you would leave similar marks.

Most birds will not touch the hairy, fuzzy caterpillars—very disagreeable mouthfuls, one would think. But happily cuckoos enjoy them as well as the smooth, slippery kind. “I guess they like the custard inside,” said a little boy I know who had stepped on a fat caterpillar on the path. “Cuckoos might well be called caterpillar birds,” wrote Florence Merriam Bailey, “for they are so given to a diet of the hairy caterpillars that the walls of their stomachs are actually permeated with the hairs, and a section of stomach looks like the smoothly brushed top of a gentleman’s beaver hat.” When you see the webs that the tent caterpillar stretches across the ends of the branches of fruit and nut trees toward the end of summer, or early autumn, watch for the cuckoo’s visits. Orioles, also, tear open the webs to get at the wiggling morsels inside, but they leave dead and mutilated remains behind them, showing that their appetite for web worms is less keen than that of the cuckoos, who eat them up clean. Fortunately the caterpillar of the terribly destructive gypsy moth is another favourite dainty. 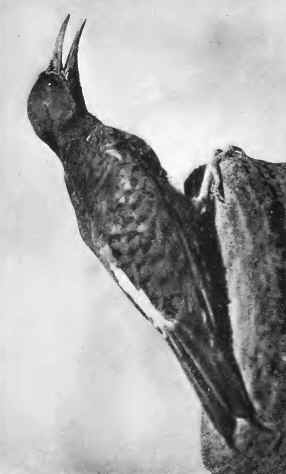 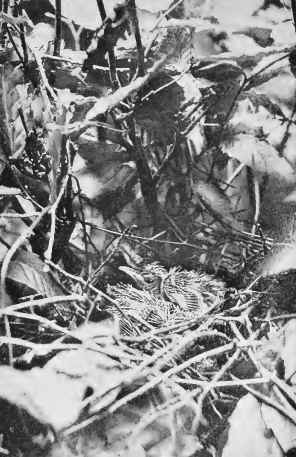 Two baby cuckoos on the rickety bundle of sticks that by courtesy we call a nest.

Perhaps you have heard that the cuckoo, like the naughty cowbird, builds no nest and lays its eggs in other birds’ cradles? This is true only of the European cuckoo. Its American cousin makes a poor apology for a nest, it is true, merely a loose bundle or platform of sticks, as flimsily put together as a dove’s nest. The greenish-blue eggs or the naked babies must certainly fall through, one would think. Still it is all the cuckoos’ own, and they are proud of it. But so sensitive and fearful are they when a human visitor inspects their nursery that they will usually desert it, never to return, if you touch it, so beware of peeping!

When the skinny cuckoo babies are a few days old, blue pin-feathers begin to appear, and presently their bodies are stuck full of fine, sharply pointed quills like a well-stocked pin cushion. Porcupine babies you might think them now. But presto! every pin-feather suddenly fluffs out the day before the youngsters leave the nest, and they are clothed in a suit of soft feathers like their parents. In a few months young cuckoos, hatched as far north as New England and Canada or even Labrador, are strong enough to fly to Central or South America to spend the winter.