Birds that spend their summers for the most part north of the United States and travel past us faster than the fastest automobile racer or locomotive—and an hundred miles an hour is not an uncommon speed for ducks to fly—need have little to fear, you might suppose. But so mercilessly are they hunted whenever they stop to rest, that few birds are more timid.

River and pond ducks, that have the most delicious flavour because they feed on wild rice, celery and other dainty fare, frequent sluggish streams and shallow ponds. There they tip up their bodies in a funny way to probe about the muddy bottoms, their heads stuck down under water, their tails and flat, webbed feet in the air directly above them, just as you have seen barnyard ducks stand on their heads. They like to dabble along the shores, too, and draw out roots, worms, seeds and tiny shellfish imbedded in the banks. 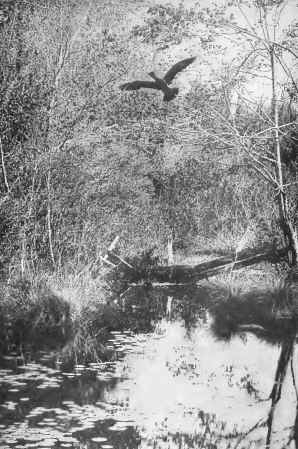 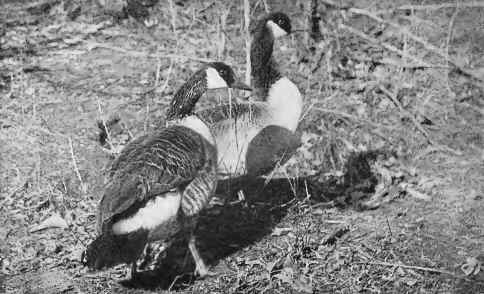 Of course they get a good deal of mud in their mouths, but fortunately their broad, flat bills have strainers on the sides, and merely by shutting them tight, the mud and water are forced out of the gutters. After nightfall they seem especially active and noisy.

In every slough where mallards, blue- and green-winged teal, widgeons, black duck and pintails settle down to rest in autumn, gunners wait concealed in the sedges. Decoying the sociable birds by means of painted wooden images of ducks floating on the water near the blind, they commence the slaughter at daybreak. But ducks are of all targets the most difficult, perhaps, for the tyro to hit. On the slightest alarm they bound from the water on whistling wings and are off at a speed that only the most expert shot overtakes. No self-respecting sportsman would touch the little wood duck—the most beautiful member of its family group. It is as choicely coloured and marked as the Chinese mandarin duck, and a possible possession for every one who has a country place with woods and water on it. Unlike its relatives, the wood duck nests in hollow trees and carries its babies to the water in its mouth as a cat carries its kittens.

The large group of sea and bay ducks, contains the canvas-back, red-head and other vegetarian ducks, dear to the sportsman and epicure. These birds may, perhaps, be familiar to “every child” as they hang by the necks in butcher-shop windows, but rarely in life. Enormous flocks once descended upon the Chesapeake Bay region. To Virginia and Maryland, therefore, hastened all the gunners in the East until the canvas-back, at least, is even more rare in the sportsman’s paradise than it is on the gourmand’s plate. Every kind of duck is now served up as canvas-back. Some sea ducks, however, which are fish eaters, have flesh too tough, rank, and oily for the table. They dive for their food, often to a great depth, pursuing and catching fish under water like the saw-billed mergansers or shelldrakes which form a distinct group. The surf scoters, or black coots, so abundant off the Atlantic coast in winter, dive constantly to feed on mussels, clams or scallops. Naturally such athletic birds are very tough.

With the exception of the wood duck, all ducks nest on the ground. Twigs, leaves and grasses form the rude cradle for the eggs, and, as a final touch of devotion, the mother bird plucks feathers from her own soft breast for the eggs to lie in. When there is any work to be done the selfish, dandified drakes go off by themselves, leaving the entire care of raising the family to their mates. Then they moult and sometimes lose so many feathers they are unable to fly. But by the time the ducklings are well grown and strong of wing, the drake joins the family, one flock joins another, and the ducks begin their long journey southward. But very few children, even in Canada, can ever hope to know them in their inaccessible swampy homes.