There is a picturesque old inn beside a post road in New Jersey with a five-storied martin house set up on a pole above its quaint swinging sign. For over thirty years a record was kept on the pole showing the dates of the coming and going of the martins in April and September, which did not vary by more than two or three days during all that time. The inn-keeper locked up in his safe every night the registers on which were entered the arrivals and departures of his human guests, but he valued far more the record of his bird visitors which interested everybody who stopped at his inn.

One day, while he was away, a man who was painting a fence for him thought he would surprise him by freshening up the old, weather-beaten pole. Alas! He painted over every precious mark. You may be sure the surprise recoiled upon him like a boomerang when the wrathful inn-keeper returned. However, the martins continue to come back to their old home year after year and rear their broods on little heaps of leaves in every room in the house, which is the cheerful fact of the story.

These glossy, blue-black iridescent swallows, grayish white underneath, the largest of their graceful tribe, have always been great favourites. Even the Indians in the Southern States used to hang gourds for them to nest in about their camps—a practice continued by the Negroes around their cabins to this day. Strangely enough these birds which nested and slept in hollow trees before the coming of the white men, were among the first to take advantage of his presence. Now, in the Eastern United States, at least, the pampered darlings of luxury positively refuse to live where people do not put up houses for their comfort. In the sparsely settled West, however, they still condescend to live in trees, but only when they must, like the chimney-swifts, who, by the way are no relation. Plenty of people persist in calling them chimney swallows, which is precisely what they are not. Not even the little house wren has adapted itself so quickly to civilised men’s homes, as the swift and purple martin. 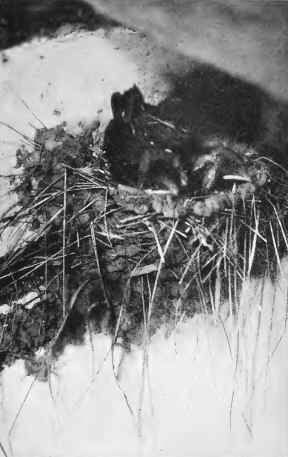 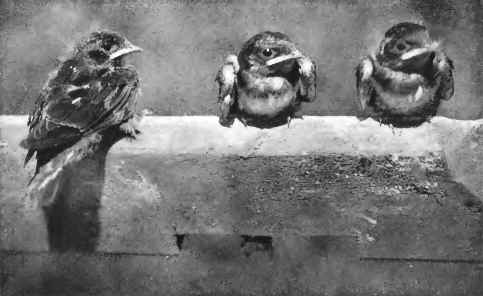 Intelligent people, who are only just beginning to realise what birds do for us and how very much more they might be induced to do, are putting up boxes for the martins, not only near their own houses, that the birds may rid the air of mosquitoes, but in their gardens and orchards that incalculable numbers of injurious pests in the winged stage may be destroyed. When martins return to us in spring from Central and South America, where they have passed the winter, insects are just beginning to fly, and if they can be captured then, before they have a chance to lay their eggs, you see how much trouble and money are saved for the farmers by their tireless allies, the swallows. Unfortunately, purple martins are not so common at the North as they were before the coming of those saucy little immigrants, the English sparrows, who take possession, by fair means or by foul, of every house that they can find. In the South, where the martins are still very numerous, a peach grower I know has set up in his orchard rows of poles, with a house on each, either for them or for bluebirds. He says these bird partners are of inestimable value in keeping his fruit trees free from insects.

The curculio, one of the worst enemies every fruit grower has to fight, destroying as it does millions of dollars worth of crops every year, is practically unknown in that Georgia planter’s orchard. Some day farmers all over the United States will wake up and copy his good idea.

A colony of martins circling about a house give it a delightful home-like air. Their very soft, sweet conversation with one another as they fly, sounds like rippling, musical laughter.

Leave a reply to Bird – The Purple Martin
30 Days Wild