A boy I know had a pair of little screech owls invite themselves to live in a box he had nailed up for bluebirds in his father’s orchard. Although they had full liberty, in time they became tame pets, even pampered darlings, with a willing slave to trap mice for them in the corn crib and hay loft. At first mice were plentiful enough, and every day after school the boy would empty the traps, climb the apple tree and feed the owls. But presently the mice learned the danger that may lurk behind an innocent looking lump of cheese. One foolish, hungry mouse now and then was all the boy could catch. This he would carry by the tail to his sleeping pets, arouse them by dangling it against their heads, at which, while half asleep, they would click their beaks like castanets. When both were wide awake he would allow one of them to bolt the mouse while he still held on firmly to the tail. Then, jerking the mouse back out of the owl’s throat, he would allow the other owl to really swallow it. When next he caught a mouse, the operation was reversed: the owl that had been satisfied before now gulped the mouse first, only to have it jerked away and fed to its mate. In this way, strange to say, the boy kept on friendly terms with the pair for several weeks, when he discovered that they liked bits of raw beef quite as well as mice. After that he carried his queer pets to the house and kept them in his room all winter. Early in the spring they returned to the bird house and raised a family of funny, fluffy, plump little owlets.

This boy discovered for himself the screech owls’ strange characteristic of changing their colour without changing their feathers, as moulting song birds change theirs. They have a rusty, reddish-brown phase and a mottled-gray phase. So far as is known, these changes of colour are not dependent upon age, sex, or season. No one understands what causes them or what they mean. Sometimes the same family will contain birds with plumage that is rusty-brown or gray or intermediate. But you may always know a screech owl by its small size (it is only about as long as a robin) and by the ear tufts that make it look wide-awake and very wise.

By day it keeps well hidden in some deserted woodpecker’s hole or a hollow in some old orchard tree, which is its favourite residence; but some mischievous little birds, with sharper eyes than ours, often discover its hiding place, wake it up, and chase it, blinking and bewildered, all about the farm. By night, when its tormentors are asleep, this little owl goes forth for its supper, and then we hear its weird, sweet, shivering, tremulous cry. Because it lives near our homes and is, perhaps, the commonest of the owls all over our country, every child can know it by sound, if not by sight. 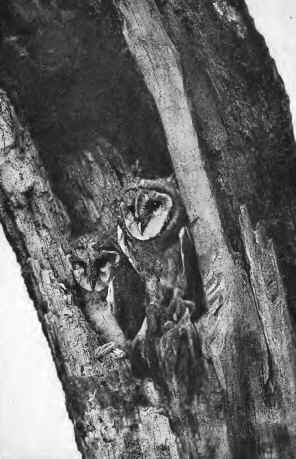 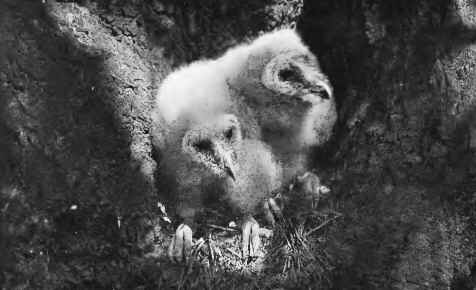