This most abundant member of his tropical tribe that spends the summer with us, is a shy, solitary bird of the swamps where you would lose your rubber boots in the quagmire if you attempted to know him too intimately. But you may catch a glimpse of him as he wades about the edge of a pond or creek with slow, calculated steps, looking for his supper. All herons become more active toward evening because their prey does. By day, this heron, like his big, blue cousin, might be mistaken for a stump or snag among the sedges and bushes by the waterside, so dark and still is he. 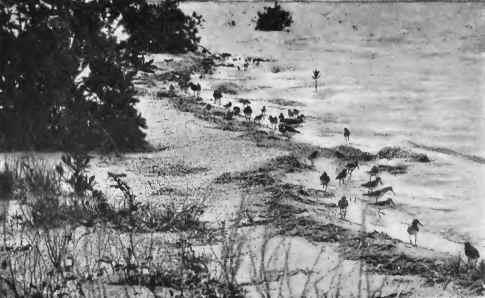 A flock of friendly sandpipers and turnstones in wading. 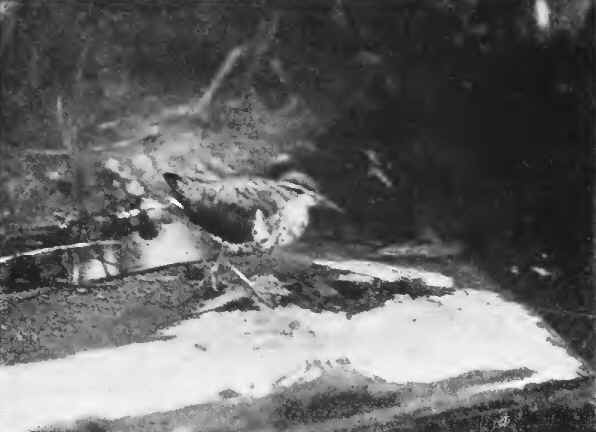 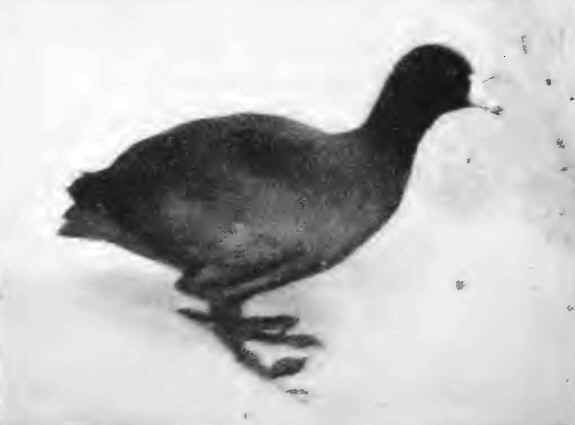 Herons are accused of the tropical vice of laziness; but surely a bird that travels from northern Canada to the tropics and back again every year to earn its living, as the little green heron does, is not altogether lazy. Startle him, and he springs into the air with a loud squawk, flapping his broad wings and trailing his greenish-yellow legs behind him, like the storks you see painted on Japanese fans.

He and his mate have long, dark-green crests on their odd-shaped, receding heads and some lengthened, pointed feathers between the shoulders of their green or grayish-green hunched backs. Their figures are rather queer. The reddish-chestnut colour on their necks fades into the brownish-ash of their under parts, divided by a line of dark spots on the white throat that widen on the breast. Although the little green heron is the smallest member of this tribe of large birds that we see in the Northern States and Canada, it is about a foot and a half long, larger than any bird, except one of its own cousins, that you are likely to see in its marshy haunts.

Unlike many of their kind a pair of these herons prefer to build their rickety nests apart by themselves rather in one of those large, sociable, noisy and noisome colonies which we associate with the heron tribe. Flocking is sometimes a fatal habit.