“Every child” who has crossed the ocean or even a New York ferry in winter, knows the big, pearly-gray and white gulls that come from northern nesting grounds in November, just before the ice locks their larder, to spend the winter about our open waterways. On the great lakes and the larger rivers and harbours along our coast, you may see the scattered flocks sailing about serenely on broad, strong wings, gliding and skimming and darting with a poetry of motion few birds can equal. There are at least three things one never tires of watching: the blaze of a wood fire, the breaking of waves on a beach, and the flight of a flock of gulls.

Not many years ago gulls became alarmingly scarce. Why? Because silly girls and women, to follow fashion, trimmed their hats with gull’s wings until hundreds of thousands of these birds and their exquisite little cousins, the terns or sea-swallows, had been slaughtered. Then some people said the massacre must stop and happily the law now says so too. Paid keepers patrol some of the islands where gulls and terns nest, which is the reason why you may see ashy-brown young gulls in almost every flock. When they mature, a deep-pearl mantle covers their backs and wings, and their breasts, heads and tails become snowy white. Their colouring now suggests fogs and white-capped waves. Why protect birds that are not fit for food and that kill no mice nor insects in the farmer’s fields? is often asked. A wise man once said “the beautiful is as useful as the useful,” but the picturesque gulls are not preserved merely to enliven marine pictures and to please the eye of travellers. They fill the valuable office of scavengers of the sea. Lobsters and crabs, among many other creatures under the ocean, gulls, terns and petrels, among many creatures over it, do for the water what the turkey buzzard does for the land—rid it of enormous quantities of refuse. When one watches hundreds of gulls following the garbage scows out of New York harbour, or sailing in the wake of an ocean liner a thousand miles or more away from land, to pick up the refuse thrown overboard from the ship’s kitchen, one realises the excellence of Dame Nature’s housecleaning.

The feather-lined nest of a wild duck. 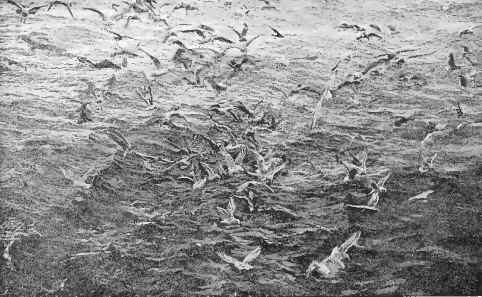 Sea gulls in the wake of a garbage scow cleansing New York harbour of floating refuse.

Gulls are greedy creatures. No sooner will one member of a flock swoop down upon a morsel of food, than a horde of hungry companions, in hot pursuit, chase after him to try to frighten him into dropping his dinner. With a harsh, laughing cry, akak, kak, akak, kak, kak, they wheel and float about a feeding ground for hours at a time.

And they fly incredibly far and fast. A flock that has followed an ocean greyhound all day will settle down to sleep at night “bedded” on the rolling water like ducks while “rocked in the cradle of the deep.” After a rest that may last till dawn, they rise refreshed, fly in the direction of the vanished steamer and actually overtake it with apparent ease in time to pick up the scraps from the breakfast table. Reliable sailors say the same birds follow a ship from our shores all the way across the Atlantic.