A hardy little friend is the downy woodpecker who, like the chickadee, stays by us the year around. Probably no other two birds are so useful in our orchards as these, that keep up a tireless search for the insect robbers of our fruit. Wintry weather can be scarcely too severe for either, for both wear a warm coat of fat under their skins and both have the comfort of a snug retreat when bitter blasts blow.

Friend downy is too good a carpenter, you may be sure, to neglect making a cozy cavity for himself in autumn, just as the hairy woodpecker does. The chickadee, titmouse, nuthatch, bluebird, wren, tree swallow, sparrow hawk, crested flycatcher and owls, are not the only birds that are thankful to occupy his snug quarters in some old tree after he has moved out in the spring to the new nursery that his mate and he make for their family. He knows the advantage of a southern exposure for his hollow home and chisels his winter quarters deep enough to escape a draught. Here he lives in single blessedness—or selfishness?—with no thought now for the comfort of his mate, who, happily, is quite as good a carpenter as he, and as able to care for herself. She may make a winter home or keep the nursery.

Very early in the spring you will hear the downy, like the other woodpeckers, beating a rolling tattoo on some resonant limb, and if you can creep close enough you will see his head hammering so fast that there is only a blur above his shoulders. This drumming is his love song. The grouse is even a more wonderful performer, for he drums without a drum, which no woodpecker can do. The woodpecker drums not only to win a mate, however, but to tell where a tree is decayed and likely to be an easy spot to chisel, and also to startle borers beneath the bark, that he may know just where to tunnel for them, when they move with a faint noise, which his sharp ears instantly detect.

This master workman, who is scarcely larger than an English sparrow, occasionally pauses in his hammering long enough to utter a short, sharp peek, peek, often continued into a rattling cry that ends as abruptly as it began. You may know him from his larger and louder-voiced cousin, the hairy woodpecker, not only by this call note, but by the markings of the outer tail feathers, which, in the downy, are white barred with black; and in the hairy, are white without the black bars. Both birds are much striped and barred with black and white.

When the weather grows cold, hang a bone with a little meat on it, cooked or raw, or a lump of suet in some tree beyond the reach of cats; then watch for the downy woodpecker’s and the chickadee’s visits to your free-lunch counter. 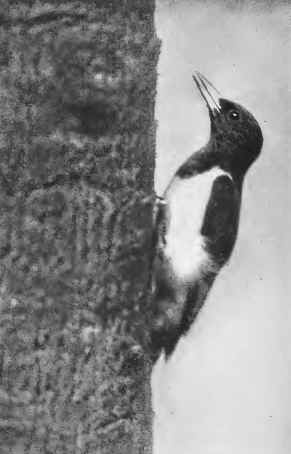