There are some children, and grown-ups, too, who persist in calling this bird the chimney swallow, although it is not even remotely related to the swallow family, and its life history, as well as its anatomy, are quite different from a swallow’s, as you shall see.

Down within some unused chimney, the modern babies of this soot-coloured, dark, grayish-brown bird first open their eyes. Old-fashioned swifts still nest in hollow trees or caves, but chimneys are so much more abundant and convenient, that up-to-date birds prefer them. Without stopping in their flight, the parent swifts snap off with their beaks or feet, little twigs at the ends of dead branches, and these they carry, one by one, into a chimney, gluing them against the side until they have finished an almost flat, shelf-like, lattice cradle. Where do they get their glue? Only during the nesting season do certain glands in their mouths flow a brownish fluid that quickly gums and hardens when exposed to the air. After nursery duties have ended, the gland shrinks from disuse. 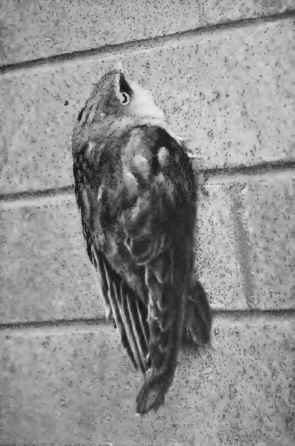 A chimney swift at rest. 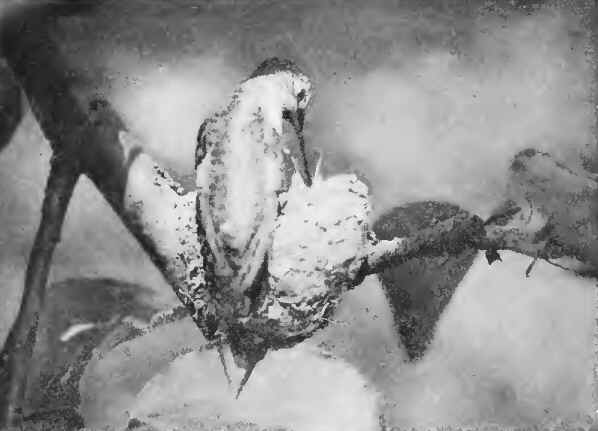 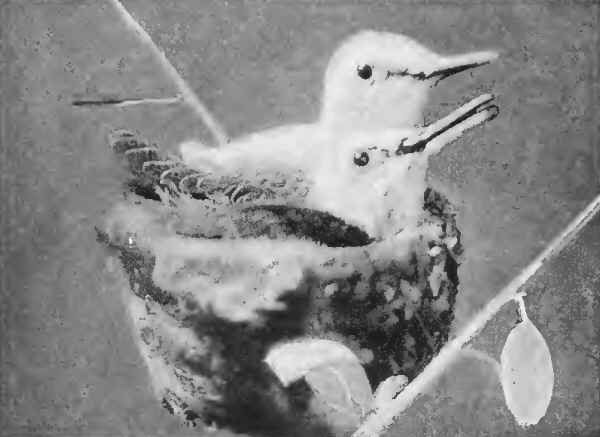 When the basket cradle has been stuck against a chimney-side, it looks as if it were covered with a thin coat of isinglass. On this lattice from four to six white eggs are laid. A friend, who innocently started a fire in his library one cold, rainy mid-summer evening, was startled and shocked when a nest and eggs suddenly fell on the hearth. He had no idea birds were nesting in his chimney. The rush of their wings he had thought was the wind. Of course the fire melted the glue, when down fell the cradle. Happily there were no “babies and all” to tumble into the flames.

When the baby swifts are old enough to climb out of the lattice, they still cling near it for about a fortnight waiting for their wings to grow strong, before they try to leave the chimney. Apparently they hang themselves up to go to sleep. Shouldn’t you think they would fall on the hearth down stairs? Doubtless they would but for their short, thin, stiff-pointed tail feathers which help to prop them up where they cling to the rough bricks and mortar of the chimney lining. Woodpeckers also prop themselves with their tail feathers, but against tree trunks. Not until swifts are a month old do the lazy little fellows climb out of their deep, dark cavern into the boundless sky, which is their true home. No birds are more tireless, rapid flyers than they. Their small feet, weak from disuse, could scarcely hold them on a perch.

One day last July I picked up on the ground a young swift I thought had dropped from exhaustion in its first flight. As swifts had been nesting in one of the chimneys, I carried the young bird in my hand into the house, up stairs, out through an attic window onto the roof, climbed along the ridgepole in terror for my life, clinging by only one free hand to the peak of the roof, and at last reached the swift’s chimney. Laying the sooty youngster on the stone chimney-cap I had crawled cautiously backward only a few feet, when lo! my charge suddenly bounded off into the air like a veteran to join a flock of companions playing cross-tag. As it wheeled and darted above the house, evidently quite as much at ease in the air as any of the merry, twittering company, don’t you believe it started the laugh on me? But what had brought so able a young flyer to earth? My wounded vanity tempts me to believe that it had really dropped from fatigue and, once on the ground, was unable to rise again, whereas it was comparatively easy to launch itself from the chimney-top.

With mouths agape from ear to ear, the swifts draw in an insect dinner piecemeal, as they course through the air, just as the whip-poor-will, nighthawk and swallows do. Fortunate the house where a colony elect to live, for they rid the air of myriads of gnats and mosquitoes, as they fly about overhead, silhouetted against the sky. Early in the morning and late in the afternoon are their hours for exercise. You will think, perhaps, that they look more like bats than birds. Watch their rapid wing-beats very closely and see if you can settle the mooted question as to whether they use both wings at once, or first one wing and then the other in alternate strokes. After you have noticed their peculiar, throbbing flight, you will never again confuse them with the graceful, gliding swallows. Although the swift is actually shorter than a sparrow, its spread wings measure over a foot across from tip to tip. No wonder it can fly every waking moment without feeling tired, and journey from Labrador to Central America for a winter holiday.