When the night herons return to us from the South in April, they go straight to the home of their ancestors, to which they are devotedly attached—rickety, ramshackle heronries, mere bundles of sticks in the tops of trees in some swamp—and begin at once to repair them. The cuckoo’s and the dove’s nests are fine pieces of architecture compared with a heron’s. Is it not a wonder that the helpless heron babies do not tumble through the loose twigs? When they are old enough to climb around their latticed nursery, they still make no attempt to leave it, and several more weeks must pass before they attempt to fly. If there is an ancient heronry in your neighbourhood, as there is in mine, don’t attempt to visit the untidy, ill-smelling place on a hot day. One would like to spray the entire colony with a deodoriser.

Thanks to the night heron’s habits that keep him concealed by day when gunners are abroad, a few large heronries still exist within an hour’s ride of New York, in spite of much persecution. 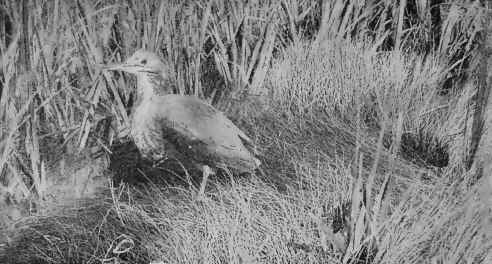 The little green heron: the smallest and most abundant member of his tribe. 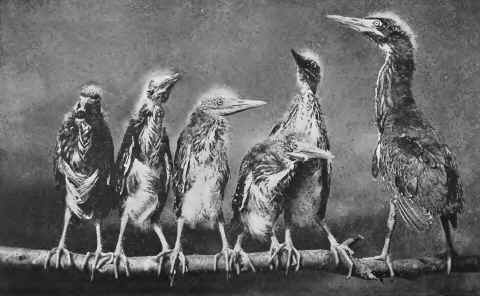 Unlike the solitary little green cousin, the black-crowned heron delights in company, and a hundred noisy pairs may choose to nest in some favourite spot. How they squawk over their petty quarrels! Wilson likened the noise to that of “two or three hundred Indians choking one another.”

Only when they have young fledglings to feed do these herons hunt for food in broad daylight. But as the light fades they become increasingly active and noisy; even after it is pitch dark, when the fishermen go eeling, you may hear them quawking continually as they fly up and down the creek. Big, pearly-gray birds (they stand fully two feet high) with black-crowned heads, from which their long, narrow, white wedding feathers fall over the black top of the back, the night herons so harmonise with the twilight as to seem a part of it.