The Mandrill is one of the largest monkeys it got its name cause it can stand on two legs for a short moment in time.

Its name Mandrill means Man-Ape and like all baboons it’s famous for its red bottom.

The Man-Ape is one of the most ferocious Monkeys/ Baboons on the planet it has over 24 teeth mostly made for ripping and chewing meats. 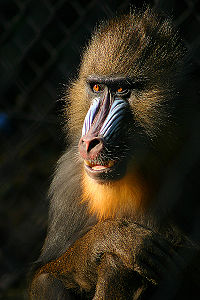 Its arm strength is more powerful then any average human it has a long tail which it uses to escape and capture prey in the trees.

The Baboon has several common enemies such as the Hawk, Leopard, Alligators and other Baboons.

Even though these Mammals have a ferocious reputation they are known to live in group several females and one dominant Male.

The Mandrill is found in the tropical rainforests of southern Nigeria, southern Cameroon, Gabon, Equatorial Guinea and Congo. Its distribution is bounded by the Sanaga River to the north and the Ogooué and Ivindo rivers to the east. Recent research suggests that mandrill populations north and south of the Ogooué river are genetically so different as to be different sub-species.

A large group of mandrills can cause significant damage to crops in a very short time, and where common they are widely perceived as pests.

Mandrills are hunted for food throughout their range, either with guns or using dogs and nets. In Cameroon, habitat loss to agriculture is also a threat

Although the Mandrill does not normally hunt larger prey, males have been observed to hunt and consume duiker (a small antelope).